With just Mt Shishapangma in Tibet to complete his 15 year odyssey to climb all the world’s 8000 metre mountains, Andrew is now preparing for what he hopes will be his final expedition in the Summit 8000 project.  In late March he will travel to Tibet to firstly climb Mt Shishapangma and if successful will then move to the north side of Mt Everest which he hopes to climb solo and without oxygen as a grand finale for the project.  He expects to attempt to summit Shishapangma in late April or early May and to attempt the Everest ascent by the end of May.
Click here to receive LIVE DESPATCHES from this expedition Once on the despatches page, hit the ALERTS button and enter your email in the box for automatic notification of updates or log on from time to time to view the latest dispatches.

March 2009
Andrew departs in mid March 2009 for what he hopes will be the final expedition in his Summit 8000 quest.  If the border to Tibet is open, he will make an attempt on the Shishapangma’s true summit with climbing partner Hector Ponce de Leon from Mexico.  Andrew and Hector have previously climbed together on Everest in 2004 and Makalu in 2008.  If all goes well on Shishapangma, Andrew hopes to make a summit bid in early May and, if successful, he will then move across to the north side of Everest to attempt a solo, alpine style, oxygenless climb of that mountain.  You can follow the expedition’s progress by hitting the LIVE DESPATCHES link.

In addition to his other charitable work with the Australian Himalayan Foundation, the Truelight Foundation and many others, Andrew was recently appointed an official ambassador of the Sir David Martin Foundation, a non-profit organisation created in 1990 by the late Governor of NSW, Sir David Martin, who had a dream of “safety, hope and opportunity for all young Australians”. The Foundation is run by a team of passionate staff and volunteers who raise money to fund programs that work to better the lives of youth in crisis. Check out the valuable work of the foundation at www.sdmf.org.au.

As a novel bit of training for his 2009 expedition, Andrew recently teamed up with Patrick Kinsella (multi sport hardman and editor of Outer Edge magazine) and Josh Caple (hardcore rockjock and professional photographer) for a quick trip up Australia’s fourteen highest peaks.  All located in the Snowy Mountains, the trio setoff on the hottest weekend on record and sweated their way up peaks which included Twynam, Townsend and of course Kosciusko.  The heatwave was so oppressive if took most of the two days to get around the 40 or so kilometres involved.  For a trip report and a more in depth story , see the April edition of Outer Edge magazine (available from 24 March 2009).
www.outer–edge.com.au 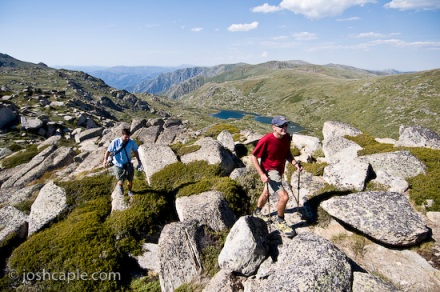 Not happy that the venture took two days, Andrew returned to the Snowy Mountains at the beginning of March and redid the 14 peaks in a round trip of 11 hours.

Andrew has now returned to Australia after being unable to secure a climbing permit for his Shishapangma expedition. He first trekked for two weeks in the Khumbu (Mt Everest) region of Nepal for some initial acclimatisation whilst waiting for his climbing partner Hector Ponce de Leon to arrive from Mexico. At the same time he hoped that his application for a Shishapangma climbing permit would be processed but upon returning to Kathmandu found that there were ongoing permit delays this season. After waiting for another 2 weeks in Kathmandu, he and Hector decided that the time left in the season was too tight for a reasonable attempt on the mountain and that they should try again next season. The two returned home and for now Andrew is resuming his training and preparing for the post monsoon season of September/October 2009. Fingers crossed for next season! Outer Edge magazine has published a major profile of Andrew and his Summit 8000 project in its April-May 09 edition. Available now in newsagents and outdoor stores.

Andrew will return to Tibet in September/October 2009 to attempt Mt Shishapangma, the last peak in his quest to climb all fourteen of the world’s 8000 metre mountains.  He will travel firstly to Kathmandu, Nepal where he will collect his store of equipment and meet up with his team; Neil Ward from Wales and Kinga Baranowska from Poland.  After a couple of days sorting climbing permits and equipment, the team will drive across the border into Tibet and commence the journey to the mountain.  They anticipate arriving in basecamp around 17 September and will commence climbing shortly after.  If the weather and mountain conditions allow, they hope to make their bid for Shishapangma’s 8013 metre summit in early October.  You can follow their progress by hitting the Live Despatches  link on this page.  Once on the Live Despatches page, you can enter your email address for automatic notification of new updates.

Andrew’s summit of Mt Shishapangma is complete as is his quest to climb all fourteen of the world’s 8000 metre mountains.

His brief report from Base Camp reads:

“Summitted the true summit of Shishapangma at 5.05pm, 2nd October, with Neil Ward.
Very tough climb via a variation of the Inaki route on the north face, caught in a storm on descent with an open bivouac at 7600 metres without equipment thrown in for good measure.
Just into basecamp now, bit tired, more later. ”

See the Summit 8000 page and The Fourteen 8000ers page for the complete story.