Well it’s been a busy year, as always packed full of exploits and fun (and a little work). 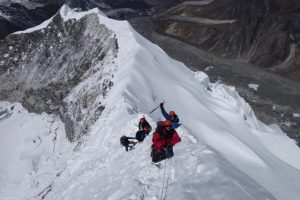 Following my return from Alaska in February, I traveled to Nepal to lead two groups on their own adventures of a lifetime.

The first was a corporate team who were out make an ascent of Island Peak (known as Imja Tse to the locals), which stands in the shadow of Mount Everest.    Although it reaches to a significant altitude of 6189 metres it is still about 2.7 vertical kilometres lower than the big E.  To first timers however, it remains a significant challenge. 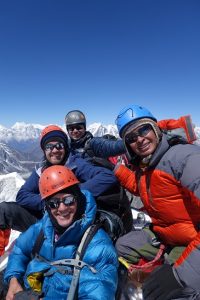 With only two weeks available to us, we all had to push hard and pray for good weather. Key to our success was to manage our acclimatisation carefully and build the team’s climbing skills along the way, so we could hit the peak at the first opportunity.

The Gods were kind to us and on summit day we had the best weather of the trek.  The team still had to push themselves to their limit to achieve the top though and it was a very weary albeit happy group that staggered back into camp that evening.   Of course our success was in no small way due to our fabulous climbing Sherpas who were strong, capable and great fun.

It was a great day for everyone – great day, great climb, great group!  I was thrilled to pick up the team’s summit certificates from the Nepal Mountaineering Association on our return to Kathmandu.

Well done gang.  First time to Nepal and a Himalayan summit under your belts!

Immediately following that trip, I led a trek to the Everest region for the Australian Himalayan Foundation in 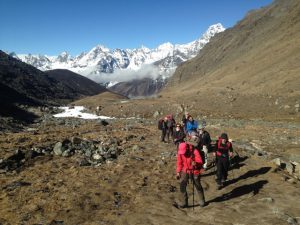 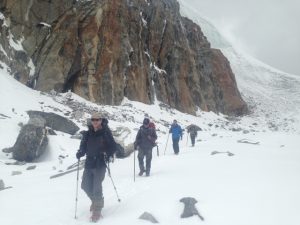 support of the One Man One Million goal to raise one million dollars for the foundation’s earthquake rebuilding projects. Our team followed trails to the remote Gokyo village, ascended Gokyo Ri (peak) 5357 metres, crossed the Cho La (pass) 5420 metres, 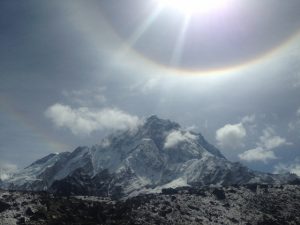 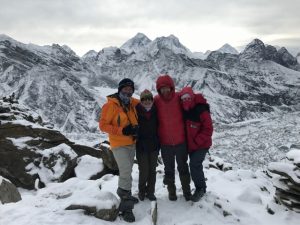 and culminated in a full day visit to Everest basecamp where we conducted a Puja ceremony and lunched with friends on an Everest climbing expedition.   All of these experiences were surreal and very spiritual but the highlight of course was to visit a local school in the Khumbu valley where we saw the value of the funds being raised as a major rebuild was taking place at the school.  Happy healthy kids getting an education made all the aches and pains of the 3 week trek disappear and we finished the trip on a major high. 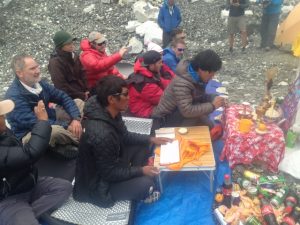 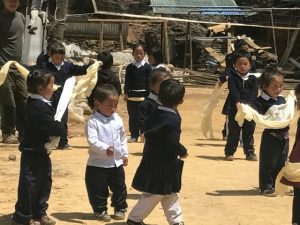 I’ll be taking more groups to Nepal in 2018 and beyond, as well as to many other parts of the world.  Watch here for news or keep an eye on my facebook page if you’d like to join me.