No luck in Alaska this time.

No luck in Alaska this time.

The concept for this expedition grew out of a search for a winter arctic challenge that would be both an expedition in its own right and a preparatory exercise for a future expedition that we were researching in the region of the North Pole. 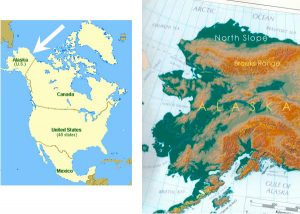 The expedition goal was to traverse the length of the Brooks Range in Alaska by ski, wholly within the winter season, an approximate journey of 850 miles or 1400 kilometres.  The range had been traversed several times by foot in summer and in parts during winter by dog sled teams, snow machines and skiers but no person had ever traversed the entire range in winter.

Our preferred mode of travel for this expedition was human powered – on cross country skis, towing sleds that carried our equipment.

For nine months prior to departure we trained, liaised with polar experts, Alaskan adventurers, local pilots and others who lived and had journeyed in the Brooks Range both in winter and at other times, including one Australian team which had attempted this very expedition three years previously.   We also traveled to the Arctic to conduct training and assessment of our systems. 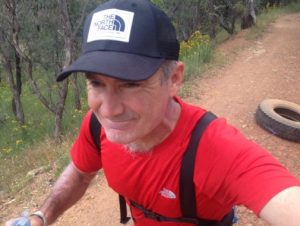 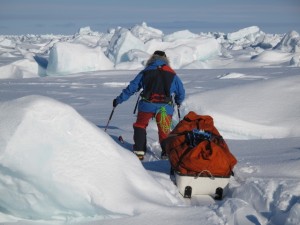 We developed our expedition plan in conjunction with those people and with the manufacturers of the highest quality expedition equipment available.

Clothing, sleeping bags and tents were provided by The North Face.

Fischer skis with skins and 3 pin bindings were purchased as they are a proven polar system.  These were backed up with snow shoes and crampons, given the very varied terrain that we anticipated in the 1400 kilometre journey.

Our sleds, known as Siglin Pulks, were sourced locally in Fairbanks due to their reputation as being ideal for Brooks Range terrain, together with purpose built gear bags designed specifically to fit the pulks. 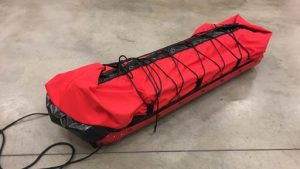 Communications systems included an Iridium Satellite phone, a Delorme InReach communicator and an air band radio for communications with light aircraft during resupplies and in an emergency.

Our diet was specifically developed in accordance with the recommendations of polar experts and nutritionists.

We travelled to Fairbanks, Alaska in late December 2016.   We spent 10 days in Fairbanks finalising preparation of our equipment, purchasing food and fuel, preparing and despatching resupply caches and monitoring the weather.

On 6 January 2017 we flew from Fairbanks via Anchorage to Kotzebue on the far north west coast of Alaska, our intended jumping off point for the expedition.  We carried with us, or had put into resupply caches, enough food, fuel, spares and medical supplies for 70 days.

In Kotzebue, the local pilot who had been contracted to fly us to the actual start point about 100 kilometres north of Kotzebue on the coast of the Bering Sea was unable to do so due to prolonged high winds in the area.  After waiting several days we decided to commence the expedition directly from Kotzebue, by skiing across the frozen sea ice of Kotzebue Sound to the land on the north side of the sound and then proceeding overland to link up with the Noatak River, which would then lead us to the Inuit village of Noatak, where we would rejoin our original route. 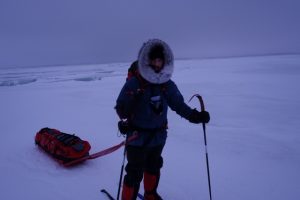 After crossing the sound we encountered very low snow conditions, making our progress extremely slow as we battled to push through thick willow bush that reached as high as two metres.  When not struggling through the willow bush, we penetrated deep snow drifts in large pine forests.  Eventually we reached the Noatak River where progress improved radically however what we had hoped would take two days actually took five, all in unseasonably cold temperatures.   Normal winter temperatures of -25C for that area consistently plummeted to -40 and below.

Given the season in which we were travelling, we generally set the alarm for a 7am wakeup at which time it was still pitch black.  It took approximately 3 hours to thaw out our boots, feed ourselves and pack up our gear for a 10am start on the skis.  We would ski by headlamp until sunrise at midday.  We had 4 hours of light before the sun, which only ever hovered on the horizon in a period of constant twilight, sank again and forced us to resume skiing by headlamp.  Generally we would ski until we found a suitable camping spot between 5pm and 6pm, by which time it was again pitch dark. 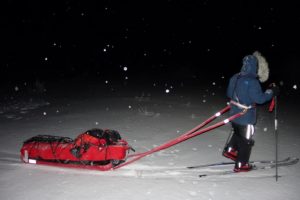 Our aim was to progress about 20 kilometres per day and this was generally achievable. Some days we skied more than 30 kilometres although the winding of the river meant that we didn’t necessarily progress that far as the crow flies.

Despite the bitter cold there was a surprising amount of wildlife and we encountered herds or Caribou, several arctic foxes, one of which was very inquisitive and followed us for several kilometres, some beaver and a wolf.

During that first period, Neil suffered a foot infection that caused significant blistering on both feet.  The problem was not due to rubbing or cold and it seems likely that he contracted the infection just prior to starting the journey.  It was probably exacerbated by the humid environment of his heavily insulated double ski boots.   Although we treated the infection with antibiotics, Neil was in too much pain to continue so it was decided to halt the expedition until his feet had healed.  From Noatak village, we flew back to Kotzebue where Neil sought professional medical advice. 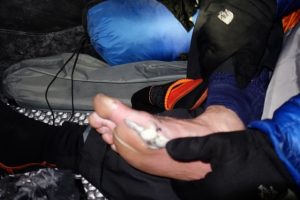 After several days and more antibiotics, Neil’s feet had recovered and we returned to Noatak to recommence the expedition.  From there we continued our journey north along the frozen Noatak River, gradually penetrating the western slopes of the Brooks Range.

However as we journeyed north, what had been consistently low temperatures in the -40s sank lower and lower, until we found ourselves in a sustained period of   -60 ambient temperatures, and below.  At this temperature much of our gear failed.  Ski poles snapped, our stove pumps leaked significant amounts of fuel inside our tent while cooking and other clothing and gear failures occurred.  When the wind blew even at very modest speeds, the wind chill was unbearable and we had to shelter to avoid serious frostbite.  Even without the wind, it was all we could do to keep our hands and faces protected and functioning. 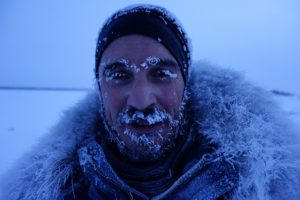 On January 20th, after a freezing night in which our -40C rated sleeping bags and the additional sleeping bags over the top couldn’t keep us even remotely warm, we decided to wait for conditions to improve.  The temperature was so low that our -60C rated thermometer broke and we could only guess at the actual temperature.  Certainly it was too cold to venture out of the tent for even a moment. 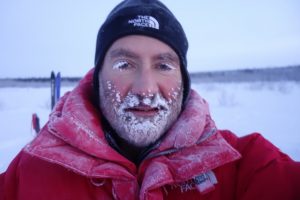 The gear failures and the wind chill obliged us to consider our options.   We knew that there were several locations ahead of us where we would encounter potentially gale force winds for several days at a time.  Given that our clothing, as good as it was, could only protect us in the ambient temperatures we were experiencing and could not possibly function sufficiently in wind chill anticipated to be as low as -100 degrees, we knew that frostbite was a certainty if we continued.  Additionally our stove pump failures had reduced our functioning pumps from five to one, and it was unreasonable to expect the one pump to continue to function for the rest of the expedition, given that it was exactly the same as those which had failed.  Finally, we realised that if we continued and then required rescue due to further gear failure or injury, we would be asking others to come out in the very conditions that had caused us to fail.  Of all the reasons not to continue, this was the one that spoke most loudly to us.  We decided to withdraw from the expedition at that point.  We regretted that we were not able to complete the expedition as planned or to meet the outcomes we’d hoped to provide to sponsors but believe that in the circumstances it was the correct decision.

It took several days to return to Kotzebue and onwards to Fairbanks.  We then retrieved our various food and equipment caches.  Food items that could not be taken home for quarantine reasons were given to local Alaskans who could use them for their own adventures.

In Fairbanks we were advised that we were unlucky to have experienced the coldest and driest winter in ten years.  While temperatures in the -40s are not uncommon at that time of year, and we were prepared for that, the sustained period of significantly colder temperatures was not normal.

We are both keen to return to the Brooks Range for another winter attempt but will need to substantially improve a few key features of our equipment to cope with any potential repeat of those conditions.  We are liaising with our sponsors and gear manufacturers to identify both the outstanding features of their products and any opportunities for improvements, although the majority of the clothing and equipment collected for this expedition worked very well and has been set aside to reuse in our next attempt.

We were very pleased with our diet and will likely follow a very similar diet on our next attempt.

In the meantime, Neil is heading to the Himalaya to make a solo attempt on Mt Everest in the premonsoon (April-May) season of 2017.

Andrew is also heading to Nepal in the premonsoon season to lead a corporate group on a private expedition to climb Island Peak, followed by a fundraising trek to Gokyo and Mt Everest, to raise money for the Australian Himalayan Foundation, of which he is an ambassador.  Click here for information on how you can join this trek and support an outstanding charity.

Andrew and Neil would like to recognise the outstanding support provided to them for this expedition by: