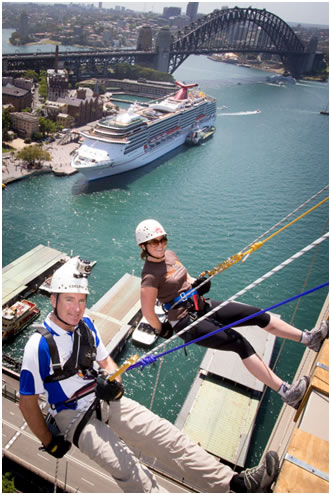 It’s been a busy few months for Andrew with his community activities.  After raising $1650 in donations for the Australian Himalayan Foundation by competing in the Blackmores Sydney Running Festival, Andrew made an incredible 14 abseil descents over 2 days in October, of the 110 metre AMP building in Circular Quay,I Sydney.  His role was to accompany other abseilers who’d each raised $1500 for the opportunity to ‘take the plunge’.  More than $300,000 was raised for the Sir David Martin Foundation and its programs to help disaffected youth.

But the year is just hotting up for adventures too.  In December, Andrew will attempt to raft the Franklin River in Tasmania, Australia’s wildest river, in a one person inflatable packraft.  All being well the trip should take about 10 days, after which he’ll head to the South West of Tasmania with the intention of backpacking all of the wildest tracks in that region – Southern Ranges, South Coast, South West Cape, Port Davey, Western Arthurs and Eastern Arthurs, culminating with an ascent of Federation Peak – 300 kilometres of rugged mountain ranges, major river crossings, endless mud and the fiercest weather Australia can unleash.  Bring it on!