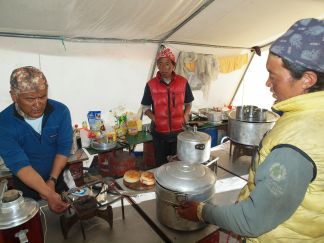 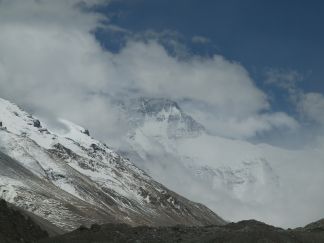 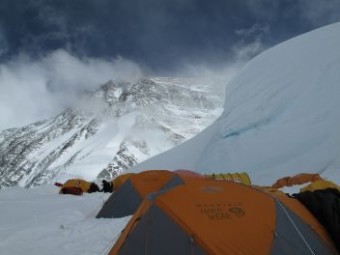 Looking up from North col

Back in basecamp again after poor weather prevented me from reaching camp 2 at 7600 metres.

After walking back up the glacier to abc, I took a planned rest day but then took another as high wind (on the mountain!) kept me tent bound. then carried a final load of fuel, downsuit and variouis knickknacks back up to the North col where I spent a much more comfortable night that on the previous foray. Unfortunately, a dump of 12 inches of snow through the night had me worried about avalanches both on the face above as well as the face below and, as the snow was still falling, I decided to retreat to abc before being cut off.

The night at 7000 metres was valuable for acclimatisation although I’d prefer to have made a carry up to camp 2, not only to drop off a load but also to push the body a little further into the thin air prior to the summit attempt. Not to worry.

now in basecamp and studying forecasts. there appears to be a brief window of opportunity to snatch a summit in several days but i’d have to climb to the higher camps in strong winds and as I’m climbing without oxygen (thus more susceptible to frostbite, amongst other things), I think the better option is to be patient and hope for a more definite and prolonged period of low wind and low humidity. High altitude climbing requires a significant degree of patience.

so for the moment its an opportunity to eat well with the fantastic support of my basecamp kitchen crew, do a little washing, read some really bad books (and the occasional good one), wear out the MP3 (no free advertising on this site!) and relax before the next onslaught.

Will know more when the forecast tells me.