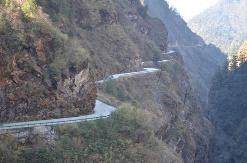 Sorry to be off the air for a little while but since the first despatch, I’ve travelled overland from Kathmandu across the border into Tibet via Xangmu and then spent a few days in Nyalam and Tingri, hill climbing, acclimatising and doing my utmost to avoid the local food. With limited success unfortunately, as there is little else.

The drive from the border on the ‘Friendship Highway’ was a relatively smooth one as it’s fully sealed, at least until the turn off to the big E. Then it becomes a might bumpy. But that’s ok, we need a bit of rough stuff to make us feel intrepid. And the highway is still an incredible drive through very steep terrain as it climbs up from Nepal to the Tibetan plateau.

Once on the plateau, there’s wind, wind and more wind. It seems colder this year than the same time in 2011, and there looks to be more exposed ice and rock up high. So it would seem that the jet stream has been doing its thing over the winter. The forecast indicates more of the same for the next little while but hopefully it will ease as we move into May. 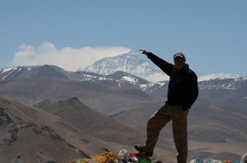 I arrived at basecamp 4 days ago but communications have been intermittent so I’m hoping to upload this despatch before it crashes again.

In addition to the expedition Puja a couple of days ago, I also walked down to the Rongbuk Monastery yesterday. What an incredible place. The spirituality is palpable.

Feeling spiritually cleansed, I took on the physical challenge and had a wash today. That’s a bit excessive I hear you say, after only 5 days at bc. But the pipes were frozen in all the hotels on the drive in, so it’s actually the first wash in a couple of weeks. Ok? 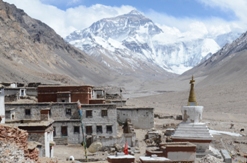 Well, the plan is to start on the mountain tomorrow and on this foray I intend to stay up for a good while to acclimatise substantially and get a load of food and equipment up to camp 2 (or camp 5 in the old terminology), around 7500 – 7800 metres. If the wind allows. So I’ll be off the air for another wee while.