Back last night from yet another trip to the North col at 7000 metres. There wasn’t time to send a despatch before I went up (only because this *&^% internet hook-up is so unreliable). Funny how dependant you become on something you never had before…

The forecast showed a brief spell of good weather, which was reasonably accurate. The 17th and 18th were predicted to be great summit days, and they were too. However whilst I can climb pretty fast, I’m not that fast and the earliest I could have gone to the top would have been today, the 19th. Which isn’t the right day – too many people and a bit too windy.

Half the commercial expeditions on this side of the mountain went for the top today (50 people or so) and the forecast indicated that the winds would pick up during the day. They were already going to be marginal but any increase would have been disastrous for me. I know I’ve harped on it before but I just can’t afford to get caught either above or below a great trail of guided clients moving at a snail’s pace. To stop up there (it can be for as long as long as a couple of hours at the second rock step if they are really slow) spells lost fingers and toes, if you aren’t using oxygen. Which I’m not. 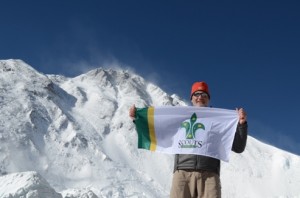 Yesterday morning I sat on the col and watched another 50 climbers heading up to camp 2, with the intention of summiting on the 20th. With the forecast indicating winds of 30+ knots on top, the same time delay issues apply. 30 knots is about the maximum in which I can climb and that really is the maximum. I’d have to be able to move fast, not stop, touch the top and drop down asap. Not a reality today or tomorrow.

So whilst others went up, I came down. Stopped for a cup of tea at ABC (and to change into cooler looking sunnies of course) then walked back down the glacier yet again to basecamp. It’s a big risk because these could be the only reasonable summit days this season and I missed the top last year playing the same game. And man, it is frustrating to be listening to people on the radio today announcing that they’ve made it up. But I do wish them all the best and hope they make it up and down safely. A few of the guides up there this season are my friends; one is Russian Sergey Bogomolov with whom I climbed on Annapurna in 2007. Very tough bugger. He has 13 of the 14 8000ers in the bag.

Anyway I’m patient and I won’t be caught up in the mad rush of the big groups. Fingers crossed, another good spell will come. Besides I’d like to enjoy the summit with one or two other climbers, not a hundred. And that’s pretty likely, as there’s only a couple of us left now. So, a couple of days in basecamp and then, hopefully, the final trudge back up that glacier to ABC.

Whilst I have time, I’d like to pass on a big hi to all Scouts. It’s a great honour to represent Scouts Australia here on the big E. I hope to get that flag to the top but if not, it will certainly go as high as I do. I won’t be giving up until the monsoon has dropped a metre of snow on me. 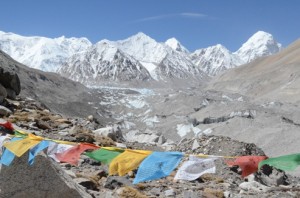 View from the balcony

And also a big hi to all members and supporters of the Australian Himalayan Foundation. The foundation lost one of its key members recently with the passing of Lincoln Hall. Lincoln was not only the famous survivor of his own 2006 Everest epic (as well as a highly accomplished author and humanitarian), but a member of the 1984 Australian ‘White Limbo’ Everest expedition which successfully made the first Australian ascent of Everest. And by an outstanding new route. My route up the North Ridge is immediately beside the North Face ‘White Limbo’ route and I shake my head in amazement every time I glance over at it and reflect on their achievement. Vale Lincoln Hall.

Well, as I sit here enjoying the view, its lunch time and I have to face the music again. I wonder what could be on the menu? Dhal baht with chapattis or chapattis with dhal baht? Uurrggh. It was good the first hundred times……