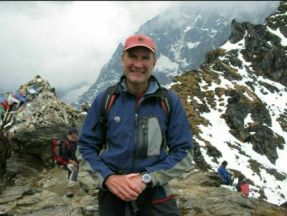 Heli at base camp

Finally our Russian built MI17 helicopter has delivered us to our mountain. Our scheduled flight for the 16th was delayed until the 19th for any number of dubious reasons but on that day another team was flown into basecamp ahead of us. Due to tricky flying conditions the heli would only take about 1000kg of equipment and needed to make several shuttles. On the second shuttle the heli came in too hard and collapsed its front undercarriage, which then caused the nose of the aircraft to crash into the ground. No-one was hurt but the heli was too severely damaged to fly again and was left in situ at Makalu.

As a result our expedition was left stranded in Lukla village trying to contract the final serviceable large capacity helicopter in Nepal. Competition for its services was fierce but we finally secured it yesterday and flew with all our equipment to Makalu south-basecamp at an altitude of about 4800 metres.

Having been so long in Kathmandu and Lukla, we were concerned that our hard won acclimatisation from the Khumbu and Langtang Valley treks may have worn off but so far we feel ok.

We still have to move our basecamp one day’s walk further up the glacier to a height of around 5600 metres, so we’ll spend several days acclimatising here first.

With Tibet being closed and our opportunity to climb Shishapangma lost for this season, its been a long and frustrating game trying to get onto our second mountain, Makalu. But we are here now and itching to get on with the climb.