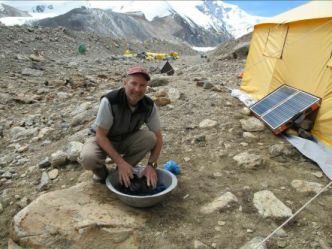 Washing at base camp 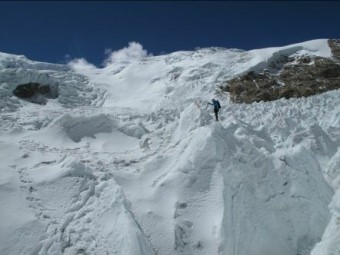 route finding in the pinnacles

The weather continues to hold at Shisha and our fingers remain crossed for more of the same.

On the 20th, Kinga and I climbed to camp 1 at 6250 metres. It was a blisteringly hot day and the hundreds of jagged ice pinnacles at the start of the climb added to the challenge as we searched for a route over and around them to access the easier glacier on the far side.

Then followed a long slog up to the camp site, which we reached after about 7 hours climbing from abc. There are quite a few crevasses at that point and we exposed a big one whilst digging for a tent site, so found a more consolidated location before setting up house and moving in. A bit of an uncomfortable night followed as the altitude tested our resolve but a few ibuprofens later the sun finally rose. That was just an acclimatisation night, so we packed up and dropped down to ABC yesterday for some proper sleep.

Washing and general domestics today but tomorrow the game continues. We’ll head back up the hill with more food and equipment, sleep again at camp 1 before pushing up to camp 2 at around 6800 metres. One or two nights there before returning to ABC in a few days time will hopefully complete our acclimatisation before the summit push.