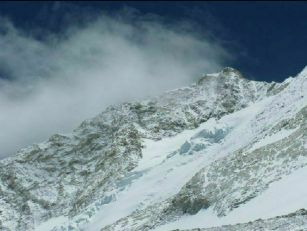 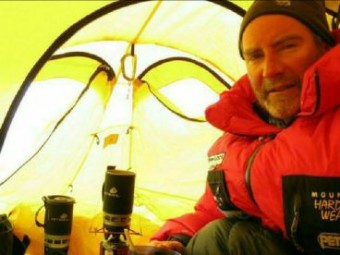 In the tent at C3 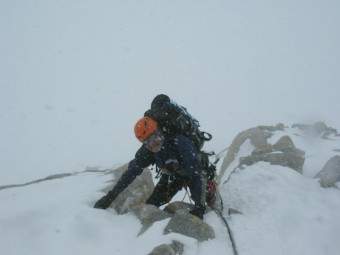 We are back in basecamp after climbing to 7400 metres to place our camp 3 on the Makalu La. Having climbed directly to camp 2, we spent the night there but Neil was unable to continue next morning as he woke with strong headaches and pressure behind his eyes. This indicated altitude related oedema and it was vital that he descend lest it deteriorated into something more serious.

Hector and I continued from camp 2 up the steep face to the Makalu La, some 800 vertical metres higher, climbing over mixed terrain of snow, rock outcrops and ice. The weather closed in and for most of the day we climbed in cloud and blowing snow. By the time we reached the flat terrain of the Makalu La it was blowing hard and we were frozen through, so we put up the tent as quickly as possible and dived inside. It wasn’ comfortable but it seemed like heaven!

A restless night followed as we adjusted to the new altitude. Although only our camp 3 on this mountain, (we still have to put in camp 4 at 7800 metres and then reach the summit at 8470 metres), 7400 metres is still higher than six of the Seven Summits, the highest peaks on the seven continents, and our bodies suffer accordingly. Headaches and nausea accompanied us through the night and sleep was itself a dream. However the morning sun brought a lift in spirits and we were glad in the knowledge that the suffering was preparing us well for the summit attempt.

Our intention was only to sleep at this altitude to acclimatise and then descend to basecamp to rest for several days before our summit push. Although tempting to make a dash for the summit whilst so high on the hill, it would doubtless have failed, as we needed these extra few days of acclimatisation and rest in basecamp.

This is one of the challenges of high altitude mountaineering – resisting the temptation to rush, whilst retaining both the motivation and strength to make repeated forays up hill. So far in our load carrying and acclimatisation climbs on this expedition, we have climbed roughly
4.2 vertical kilometres, all of it above the 5600 metre altitude of basecamp, just to establish camp 3!

Needless to say we are getting tired and homesick. We have all lost considerable weight and continue to suffer from colds, chest infections and other bugs but our motivation is strong and spirits high. Hector and Neil are great climbing companions.

If the Gods and weather allow, we expect to start our summit push from basecamp on Saturday or Sunday and to try for the summit on the 20th or 21st but i’ll post a quick update before we go. Time now for a good basecamp meal and some real sleep.