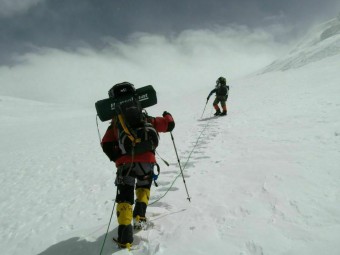 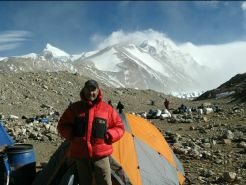 Hi from Shishapangma basecamp on a cold and snowy Monday morning. We returned to abc on Saturday after 3 days of hardwork and drama on the mountain. On the first day we climbed to camp 1 at 6450 metres, in deteriorating conditions, as the wind picked up to gale force. Following a sleepless night, the winds eased and we set out to open the route to camp 2. (We being myself, a Welsh climber Neil Ward and his climbing Sherpa, Dawa, with whom I have loosely teamed up for the climb.) Within 10 metres of camp 1, Neil plunged 20 metres down a crevasse due to some slack rope beween him and Dawa. He was unhurt but caught upside down in the rope, so needed to be hauled out by a z pulley rescue system and we had him on the surface soon after. We pushed on and broke trail up to camp 2 at 6850 metres, fixing ropes over crevasses as needed. Following a night at camp 2, and having left a depot there, we are now taking several rest days in abc, whilst we plan for our summit attempt. The weather at the moment is grim with snow showers and thick cloud.