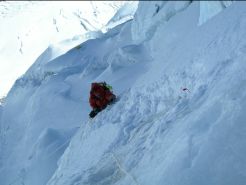 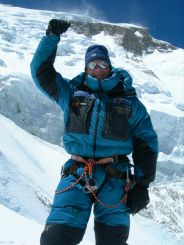 Whew, back down from the top which we reached about 3.20pm on Thursday 24th, after an epic climb.

Reascending to camp 2 on Sunday, we pulled the fixed ropes out of the ice on Monday as we continued up to camp 3. Extremely technical climbing, including grade 5 overhanging ice on the major serac band stopped us at camp 3 for an extra day, forcing us to camp for two nights below very unsable seracs. This was too much for some of the team who decided to retreat to bc. Serge incurred nasty snow blindness and could not continue, so just Ivan, Fernando and I continued over the serac band to open the route to camp 4 in extremely heavy snow conditions on Wednesday. We were unable to reach our planned c4 at 7400 metres, instead making camp around 7100 metres in a tiny 2 person summit tent, with 1 sleeping bag for the 3 of us!

After a horrible sleepless night we set out at 4.30am and climbed through the day on steep, exposed and unstable slopes, to finally perch ourselves on the knife edge summit on Thursday afternoon.

A quick photo and a long down climb saw us endure another horror night at camp 4 before descending all the way to bc last night.

Wow! I’m in awe of the climb, the conditions, our success and our survival and can say that this was the most demanding but rewarding 8000 metre climb I’ve done to date. My 12th 8000er and a first Australian ascent to boot, so I’m thrilled. A couple of pics attached but if you want to see the summit shot, then you’ll have to come to the slide show or buy the book!

Now planning our return to Kathmandu but not sure when we’ll get there. Probably one more despatch when I’ve had some sleep and a bite to eat.