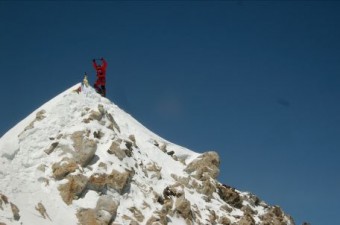 The top of Makalu 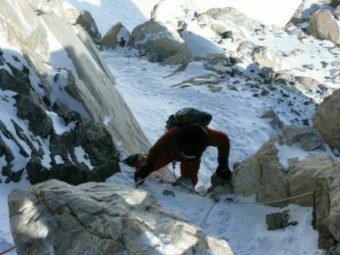 climbing the rocks to the summit ridge 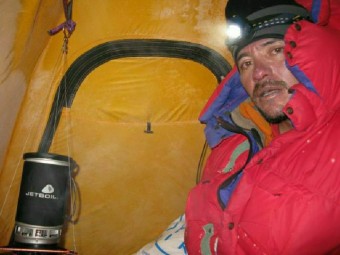 It was a beautiful summit on a beautiful day and a fantastic relief after all the obstacles we’d encountered during this expedition. Success did not come easily and unfortunately neither Hector nor Neil were able to join me on top.

Having set out on the 17th, Hector and I climbed directly to camp 2 in hot but good snow conditions. Neil had gone a day ahead of us to get extra acclimatisation and on this day climbed to camp 3. Hector and I moved to c3 on the 18th, expecting to find him there, only to discover that he’d moved up to c4, obviously feeling strong in the altitude.

The 19th brought unforecast strong winds and a number of climbers, including Neil, were forced to abandon their summit attempts from high on the mountain. Hector and I decided to delay our summit attempt by a day, and spent that day in c3, resting, rehydrating and and trying to analyse various weather forecasts. We decided the 21st was the best chance for success and on the 20th moved up to camp 4 at 7950 metres.

There we crammed into a tiny summit tent and debated the merits of waiting for the warmth of dawn or setting off around midnight to beat the regular change in the weather around 10am. We decided that the weather would hold and went for the late start of 3.45am.

From the start Hector suffered extreme exhaustion, probably a combination of altitude and all the ailments that had afflicted him throughout the expedition. It was a great disappointment to see him turn around at about 8100 metres. I continued on with 2 other climbers, Ted Atkins (UK) and Radek Jaros (Czech Republic). We made good time over the lower snow slopes and into the rock buttress leading to the summit ridge. Fun rock scrambling for several hundred metres and a few snow ramps led onto the ridge, followed by a short traverse to the false summit. Lenticular clouds right on the summit had teased us throughout the morning but as we approached the top they backed off and we traversed along the delicate ridge to the pointed, true summit, 7 1/2 hours after setting out from c4.

It had been a long and difficult expedition and it was a great feeling to hug the tiny summit and look down upon the world. Everest stood tall and proud a few kilometres away and hundreds of peaks of the Himalayan chain stretched east and west of me. My only regret was that neither Hector nor Neil were able to share the view.

After 15 minutes on top I reluctantly eased back down the ridge and down climbed quickly to c4 and, with Hector, to the safer altitude of c3. Yesterday we descended in storm all the way to basecamp. We had been lucky to steal a brief window in the weather.

We are now waiting for porters to help us trek back to civilisation but in the meantime it is a great relief to sleep on solid ground without worry of avalanche or blizzard. We’ll be here for days yet, so plenty of time to collect my thoughts and send a final despatch. Off now to the dining tent for some fresh food…