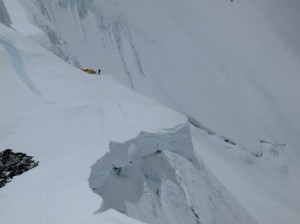 Back in basecamp a couple of days ago, after a successful load carry to camp 2 (camp 5 in Mallory’s terminology) at 7700 metres, where I dropped a tent, stove, food, gas and various bits and pieces. The winds have been so strong that I didn’t erect the tent; just left the cache under a rock. No shortage of those up there, particularly this season with the wind having stripped the mountain bare.

We’ve been hearing stories of expedition’s cancelling on the south (Nepal) side of the mountain due to rock fall; a result of the very dry season. On our side however, the mountain conditions are ok. Our biggest issue is the wind.

Today the upper half of the mountain is being hammered by the Jetstream and the forecast says more of the same for the next few days. We are hoping for some respite in a week or so. Given that the season is three quarters over, I suspect that any potential window will see a rush for the summit from the various expeditions here. I shall have to hope for a sufficiently long window that the big commercial groups do their thing and get out of the way, so that I can have a relatively clear run at the top. Climbing without gas means that delays during the climb could result in frostbite, oedema or both. Best avoided if possible. 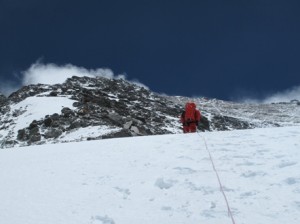 The load carry to camp 2 was tough and I’ve decided to make my summit bid from camp 3 (8300 metres) rather than a long push from camp 2. Whilst the extra day at extreme altitude without gas is not something I particularly want to expose myself to, I think that the climb along the very long summit ridge, combined with the 800 metre ascent from camp 2 to the ridge, will be too long to do in a day and I would very likely run out of time. Guess I’m not the spring chook I was when I got into this madness. Is it coincidence that at advanced basecamp I’m reading ‘A Bridge Too Far’? Or is it fortuitous that at Camp 1, I’m reading Paulo Coelho’s ‘The Alchemist’. If adapting my plans to realise my dream is necessary, so be it. Anyway, I’ll just have to play it by ear and see how the body copes. Methinks it will hurt. In fact, I think this will be the hardest summit day of the last 20 years. Might as well finish with the best, right? Right?

Speaking of pain, a large Russian commercial expedition celebrated May Day in basecamp a couple of days ago and invited all the expeditions to help them party. Note to self – alcohol and altitude don’t mix! 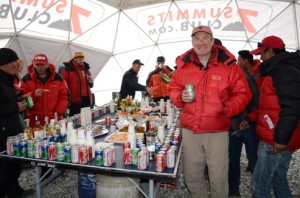 We still haven’t achieved a functioning IT system here, so I have to visit other expeditions’ basecamps to access the internet, which costs them a lot. Therefore I can only attend to urgent emails and upload the occasional despatch. My apologies again to all who have sent emails wishing me good luck. I very much appreciate them but I just can’t respond to you yet.

I expect to be here for another few days before heading up the hill for a crack at the world’s best view, so I should be able to post one more despatch before I go.