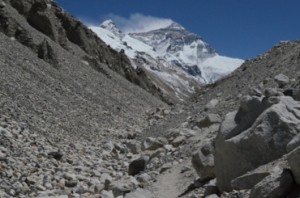 20kms to the hill

Back in basecamp day before yesterday but only now getting communications. Thanks to all who sent best wishes and apologies for not replying – email is almost impossible to operate this year.

I didn’t get as high as I’d hope on the push due to very high winds. The Jetstream is really pounding us this year and the temps are a good 10 lower than the corresponding period last year. Days at advanced basecamp (abc) are around -12C and nights around -20C.

After a couple of nights acclimatisation at the halfway camp to ABC, I finished the second stage of the walk to find abc totally devoid of snow this year and the mountain above, shiny and menacing. 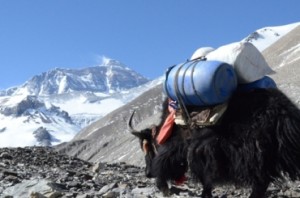 There was a bit of a delay as I waited for my climbing equipment to arrive on the somewhat cantankerous local transport but then I was able to make two load carries up to the North Col at 7000 metres. On the second carry I stayed up there for acclimatisation and endured a very blustery night with wind getting under the tent and giving it the old heave ho from time to time. I’m pleased to say that I still managed to get some sleep, which means either my acclimatisation program is working or I was just exhausted from carrying up the two loads of food, tents, fuel and other equipment. 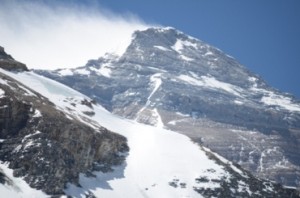 It wasn’t the place to hang around so next morning I dropped back down to abc and then walked the 20kms back to basecamp same day. I slept well that night!

The jet stream really is giving us a hard time this season. It’s not just colder but we are being constantly blasted by gale force winds. There’s no chance for a summit in these conditions. It’s going to be a waiting game for a while but even when things ease, it will be a tough climb.

The Mother Goddess is showing her tough side this year and the mountain has been stripped bare of snow. The forecast says there’ll be an easing of the wind (a little) in a couple of days, so I plan to head back up to abc in a day or so, then back up to the North Col and to get that carry of equipment up to 7900 metres.

Back in a week or so for a rest before what could potentially be a push for the top. But the Mother Goddess will have to put on a happy face before then.