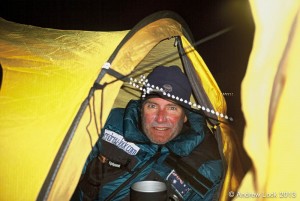 “Climbing one 8000 metre plus peak takes Olympic-standard conviction. Climbing all 14 of them is like winning a medal in 14 Olympics. You can almost hear the flutter of caps and beanies as they are doffed by mountaineers around the world.  We applaud Andrew Lock’s achievement. He is a master of thin air.”  Greg Mortimer OAM, first Australian to summit Mt Everest.

Andrew Lock OAM is the most accomplished high-altitude mountaineer in Australian history. He is the only Australian, the first person in the entire British Commonwealth, and just the 18th man in the world, to climb all fourteen of the world’s 8000 metre mountains.  His achievements encompass 18 summits of those 8000 metre peaks, including Mt Everest (twice), three times that of any other Australian, placing him in a select group of the world’s best alpinists. Additionally, Andrew accomplished the first Australian ascent of 6 of those mountains, a record that can never be broken.  His continuing mountaineering successes include:

Andrew was featured in the DISCOVERY CHANNEL 6 part mini series – Everest: Ultimate Survival and is the published author of SUMMIT 8000 and MASTER OF THIN AIR.

He holds a Bachelor of Social Science (Emergency Management) with Distinction.  In addition to being a professional corporate speaker, he is a regular speaker at charity events and is the official Ambassador for Scouts Australia, the Sir David Martin Foundation and the Australian Himalayan Foundation.  He has been appointed an Australia Day Ambassador six times and has been awarded the Order of Australia for Services to Mountaineering, Australia Commendation for Brave Conduct, Australia National Police Service Medal, Australia National Medal and Australia Defence medal.  He has twice been awarded the Mount Everest medal by the Government of Nepal.

“What Andrew has done is outstanding and should not only be seen as an Australian first but more importantly puts him in the running for the international top ten for reaching the toughest grand slam on the planet – the fourteen 8000ers.”  Peter Hillary, Everest summiteer, author and son of Sir Edmund Hillary.

JOIN ME ON AN ASCENT OF MOUNT HIMLUNG, 7126 METRES, NEPAL HIMALAYA


From 14 October to 14 November 2019, I'll be leading a team to climb Mt Himlung in the Nepal Himalaya.  This trip is open to enthusiastic adventurers...