Despite being the first of the 8000 metre peaks to be climbed (by the French in 1950), Annapurna has the lowest number of ascents and by far the worst reputation of any 8000 metre mountain. It is a technical challenge on even its easiest routes, and every route is severely threatened by avalanches. Andrew’s first attempt on this mountain ended in tragedy. Attempting its north face in the spring of 2005, he joined a number of climbers from around the world. However a short way above camp 2, the team was struck by a large avalanche. Whilst Andrew and several others were able to take cover, 4 of the team were swept down the mountain. Despite a valiant rescue attempt, in which the four injured climbers were evacuated to camp 2, one of them died shortly after in Andrew’s arms. The other three were successfully brought down the mountain and evacuated to Kathmandu but the remaining climbers had lost the drive to complete the climb and left it for another year. 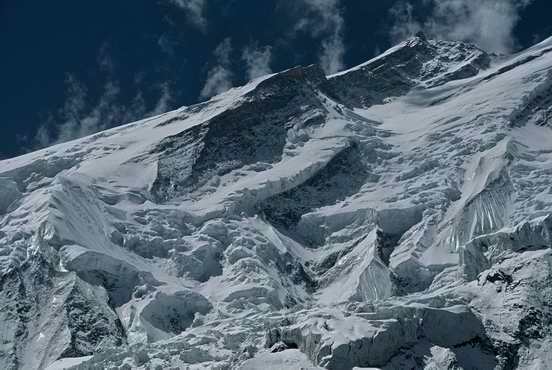 Annapurna 1, north face.  The German ridge is the convoluted pile of seracs
just left of centre that slopes upwards and to the right.

Regarded as the most dangerous of all the 8000ers with statistics of 1 in 2 summiteers being killed on the climb, Andrew did some serious soul searching about the justification to return to this fearsome mountain. However as one of the fourteen peaks in his Summit 14 project, Andrew had to face his demons or give up on the project. Needless to say, his love for the mountains was too strong and he was soon planning his return. He achieved this in 2007 when he joined with a highly experienced team that included Sergey Bogomorov (Russia) and Inaki Ochoa (Spain) both of whom had twelve 8000 metre summits under their belts. With Andrew’s 11 prior successes the team was strong and motivated. They shared the mountain with an international team that included Edurne Pasaban (Spain), Fernando Gonzalez (Columbia) and Ivan Vallejo (Ecuador). Ivan also had twelve 8000 metre summits to his credit.

The two teams combined for the climb and found the mountain to be the most dangerous that any of them had attempted. Motivation was tested to the maximum as they fixed ropes up the steep German ridge, which they had chosen over the traditional French route, in the hope that it would be safer. It wasn’t safer but it was certainly more technical and considerably longer.

By the time they had reached the technical crux of the route, a massive 80 metre high overhanging serac at 6500 metres, all but Andrew, Ivan and Fernando, had given up in the face of the constant extreme danger. The final three pushed on however, believing the conditions to be just within the limitations of acceptable risk. Once above the serac, they climbed over wind slab, deep snow and into ever deteriorating conditions but finally, on May 24th they reached the knife edge summit at 3.20pm. This was No 12 in Andrew’s Summit 14 project and, as the first Australian ascent, Andrew’s fifth first Australian ascent of an 8000 metre peak. So fearsome was this climb, that upon returning to basecamp after the climb, Andrew vowed never to set foot on the mountain again.