Lying to the south of Broad Peak in the Karakorum ranges, these two 8000 metre summits form part of the Gasherbrum massif that includes Gasherbrum 3, 4 and 5, although only Gasherbrums 1 and 2 tower into the rarefied 8000 metre ‘death zone’. For his climb on these peaks in 1999, Andrew joined an international team that included 1 Spanish, 2 Italians and a Brazilian. Despite some language barriers (although very satisfied with the culinary aspects of the expedition), Andrew climbed hard to attempt the first Australian ascent of Hidden Peak (Gasherbrum 1).

Teaming up with the Spanish team member over several weeks of climbing, Andrew established camp 3 and left a depot of high altitude equipment in preparation for the summit attempt. Constant multi day storms delayed the attempt but a brief 2 day fine weather spell provided an ambitious alternative. Changing goals, Andrew and his partner made a dash for the summit of the less technical Gasherbrum 2, climbing directly to camp 3 in a single day. After a brief rest to rehydrate, they pushed on for the summit at midnight. With his high altitude downsuit and mittens in the camp 3 depot on Gasherbrum 1, Andrew was forced to climb in bitterly cold conditions with only his basecamp jacket for warmth. Nonetheless he continued at a racing pace (perhaps to try and keep warm?) and reached the summit at 9.15am, one of the fastest ever ascents of the mountain. Not wanting to miss any opportunity to achieve his main goal, Hidden Peak, he descended the mountain the same day in a mighty push to the base.

A few days later, when another storm cleared, he was back on Hidden Peak. Despite exhaustion from the lightning ascent of Gasherbrum 2, Andrew retained his focus and climbed back to his previous high point at camp 3. With just he and his partner to forge the route, they set off in the darkness of night but found themselves in deep snow on the steep upper slopes. His partner soon fell behind, leaving Andrew the arduous task of breaking trail for the entire day, more than 1000 vertical metres to the summit. Exhausted beyond words but determined not to fail, he pushed onwards and upwards, finally reaching the summit the following evening after 19 hours of unrelenting effort and in the process achieved the first Australian ascent of this mountain, in exemplary style. 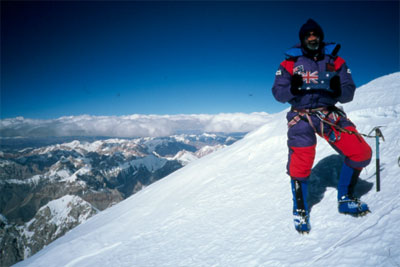 Andrew on the summit of Gasherbrum I