One of the toughest and most dangerous of the 8000ers, Nanga Parbat did not give up her summit easily to Andrew. His first attempt on the mountain was via what is probably the most difficult of all routes in the Himalaya, the Mazeno ridge, a 13 kilometre ridge of ice, steep rock buttresses, precipitous slopes and mighty cornices, which remains unclimbed to this day. For his 1995 attempt, Andrew teamed up with some equally might names in Himalayan mountaineering, including Doug Scott, Voytek Kurtyka, Sandy Allan and Rick Allen. In tough conditions that saw two of the team depart for home, Andrew persevered with his remaining team mates to establish a record for the furthest ever reached along the ridge. Although unsuccessful, Andrew describes the climb as one of his most enjoyable and rewarding expeditions, having climbed with such exalted expedition partners in such fine alpine style.

Success does not always come on the first attempt in the Himalaya and knowing when to retreat is a key to Andrew’s climbing philosophy. Undeterred by his unsuccessful first attempt, Andrew returned to the mountain in 1996 with an international attempt on the south face. Once again, tough conditions on the mountain saw the departure of the majority of the team for warmer climes but Andrew, ever focused to succeed, stayed until the last. In a fierce blizzard on the final summit push however, over a metre of snow dumped on him in less than half an hour, destroying his tent and weighting the slopes with dangerous avalanche hazard. Recognising the foolishness of trying to continue, he beat a careful retreat to basecamp, where to his dismay, he found that team members had stolen most of the expedition equipment and money, sparking a cross country chase that provides a story almost as fascinating as the climb itself! 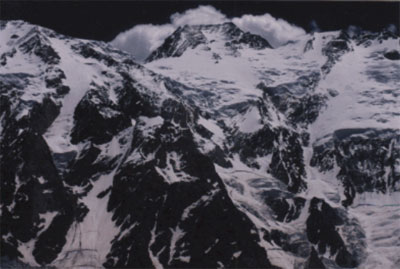 Never one to give up, Andrew returned again in 1998 for yet another attempt, joining with a well know British mountaineer who shared the ambition of climbing all 14 of the 8000ers. The expedition progressed well, despite massive avalanches sweeping the mountain faces and constant rockfall which took the life of a friend from another expedition. On a mountain that rarely sees multiple expeditions, this season saw several parties share the route. Anticipating a strong, consolidated team on the summit push, Andrew was devastated to find that the other climbers, including his own team mate, refused to share the work of breaking trail in the deep snow to the summit, preferring to save their energy to improve the chances of success. Despite an exhausting 14 hour climb from the high camp at 7500 metres, Andrew broke trail and led the way up the deep snow slopes, through rock buttresses and blizzards to finally reach the summit. There followed an epic night descent which saw Andrew forced to bivouac near 8000 metres for the second successive expedition, without tent, sleeping bag, food or stove. Andrew’s description of his bivouac on this mountain provides one of the most illuminating explanations of his thought processes and survival tactics on these hills. Days later he staggered from the mountain, the first Australian ever to have climbed it.

Once again, Andrew’s determination to succeed, together with his incredible capacity to cope with the world’s worst conditions and highest altitude, provide an epic, yet almost unknown story of human endeavour and achievement.